NEW YORK – May 17, 2012 – USA Network is building on its consistent track record of hits and expanding its original programming slate with the development of several high-profile comedies. The new projects will join the network’s latest acquired series – the award-winning and top-rated MODERN FAMILY – when it beings airing next year. The new slate features some of television and film’s most sought after comedic talent, including Kelsey Grammer, Mark Gordon, Denis Leary and Gail Berman and Lloyd Braun. The announcement came today from USA co-presidents Chris McCumber and Jeff Wachtel.

"The comedy genre has re-emerged as a top choice for television audiences, and we anticipate our latest projects coupled with MODERN FAMILY will ignite excitement with our viewers,” said McCumber and Wachtel. “Our track record of provocative storytelling from marquee talent has made USA a top entertainment brand for consumers and a great investment for brands looking to reach them.”

“USA is the perfect home for MODERN FAMILY,” said Steven Levitan, the show’s executive producer. “We are proud to anchor USA’s next generation of comedies when we begin airing next year.”

REGULARS, BENCHED, THE DICCIO BROTHERS and START UP will join the previously announced comedy projects in development: PAGING DR. FREED, from Michael Feldman and SIRENS, from Denis Leary.

BENCHED – After losing her boyfriend and her high-powered job as an attorney all on one day, Nina finds that the only job available to her is at the Public Defender’s office. She quickly realizes that the system is more screwed up than her own crazy personal life. Written by Michaela Watkins and Damon Jones. Executive produced by Mark Gordon (“Grey’s Anatomy,” “Criminal Minds”) along with the Mark Gordon Company. From ABC Studios.

THE DICICCO BROTHERS – From comedy icon Kelsey Grammer and writer Ed Cannistraci comes the story of a promising dot-com entrepreneur who moves to the very politically correct culture of Silicon Valley with dreams of making it big. His dreams may unravel though when his colorful, blunt, and unrefined extended family arrives to “offer their support.” Story by Ed Cannistraci & Chris Cannistraci and teleplay by Ed Cannistraci ("Pierre Pierre"). Executive produced by Kelsey Grammer (“Medium,” “Girlfriends,” “The Game”), Brian Sher and Stella Stolper, with Grammnet Productions. From Universal Cable Productions.

START–UP – Matt and Josh don’t want to settle in life, love or in deciding on what job to get out of college. They don’t want to be cogs in some big company’s machine – they want the new American dream…being their own bosses and creating a start-up. Now all they have to do is land on an idea and hey, what could be so hard about that? Written by Justin Spitzer, (“The Office”) and executive produced by Peter Traugott (“Samantha Who?,” “Jake In Progress”), comes a comedy about the great lengths this group of friends will go to dream big and cash out.
From Universal Television.

PAGING DR. FREED – From Michael Feldman (“That’s So Raven”) comes PAGING DR. FREED, a comedy about two gynecologist brothers who inherit their father’s thriving medical practice after he suffers a heart attack during an attempt at “playing” doctor with his young secretary. Along with taking over the family business, these brothers also must deal with something else their father left behind – their overbearing, neurotic mother. Trusted and beloved by their patients, these guys are professionals when it comes to women but only from the neck down. From Fox 21.

SIRENS – The distinct comedic point of view of Denis Leary returns to television with SIRENS. Teaming up with the co-creator of “Wedding Crashers,” Bob Fisher, Leary’s new comedy follows three of Chicago’s best EMTs whose sometimes self-loathing, other times narcissistic, and always downright self-destructive personalities make them unqualified for sustaining relationships, friendships and most occupations. They are, however, uniquely qualified for saving anyone unlucky enough to wind up in their ambulance. From Fox Television Studios. - ## USA NETWORKS

FOR ALL COMEDY NEWS GET THE COMIC BIBLE MAGAZINE

Good news for all! 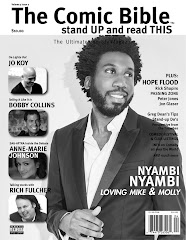